The young trumpeter Gordon Au may have been born in California and named his band after a boulevard in old Brooklyn, but more than any other group on the current Hot Jazz scene, his music is the living embodiment of the great New Orleans revival—the years of Bunk Johnson, George Lewis, and the beginnings of Preservation Hall.
— Will Friedwald, The Wall Street Journal

How lucky we are to have these young cats swinging out for us!…Come hear this band: they are the past, present, future rolling on!
— Michael Steinman, music writer

T he Grand St. Stompers are a New York-based New Orleans-style hot jazz band, reviving and refreshing the music of the 1920s onward for today’s listeners, swing dancers, and music fans. With the talent and experience of NYC’s top traditional jazz singers and players, they delight audiences at festivals, dance conventions, music halls, weddings, and other special events. To enquire about booking the Stompers, please contact us.

The Stompers are loved not only for their authentic performances of vintage jazz tunes, but also for their jazzy versions of songs from classical music, Disney, TV, film, and even pop music, as well as their own exciting originals. Their albums are available for order or download at our store. 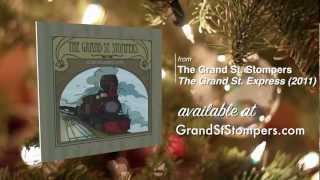 Hear the Stompers’ jazzy
version of Waltz of the Flowers!

In New York, catch the Stompers regularly at Radegast Hall & Biergarten and elsewhere—see shows. The Stompers have also performed at:

The Grand St. Stompers Are:

Gordon Au (trumpet/cornet/vocals, leader), called “comfortable in any idiom and fearless” by music writer Michael Steinman, embodies the fusion of tradition and modernity that defines the Grand St. Stompers. During a fellowship residency with the world-renowned Monk Institute, he performed with no less than 23 Grammy Award-winners, including Herbie Hancock, Wayne Shorter, Chaka Khan, George Benson, Ellis Marsalis, Benny Golson, and Terence Blanchard. Since moving to New York, Gordon has recorded with Grammy winner Brian Blade, saxophonist Rich Perry, and Monk Competition winner Melissa Aldana—whose 2012 album with Gordon, Second Cycle, won the Chilean Altazor National Arts Award for Best Album. Gordon has performed with Grammy winner Wycliffe Gordon, international flamenco star Carmen París, and with such groups as Vince Giordano & the Nighthawks, David Ostwald’s Louis Armstrong Eternity Band at Birdland, the David Bromberg Big Band, the Jonathan Stout Orchestra, Michael Gamble & the Rhythm Serenaders, Mint Julep Jazz Band, Dandy Wellington, Glenn Crytzer, Baby Soda Jazz Band, Gordon Webster, and many others. He is a frequent guest artist at festivals around the country, including the International Trumpet Guild Conference, Redwood Coast Jazz Festival, Jubilee By the Sea, Jazz Bash By the Bay, Sacramento Music Festival, and Jazzaffair. As a composer and arranger, Gordon is the recipient of an ASCAP Plus Award, and has written for Terence Blanchard, Tiger Okoshi, Elizabeth Shapiro, Melissa Aldana, Carmen París, Margi Gianquinto, and others. He has performed in Japan, Australia, Italy, England, France, Spain, Finland, the Netherlands, Panama, Israel, and in India with Herbie Hancock and others as part of the US State Department’s “The Living Dream” tour, which commemorated the 50th anniversary of Martin Luther King Jr.’s visit. On the west coast, Gordon also leads the Au Brothers Jazz Band. For more information, see GordonAuMusic.com.

Tamar Korn (vocals) has been hailed in the press as a “one woman jazz revival” and “one of the freshest and most exciting new voices on the New York scene”, who will “amaze you with her voice. [...] she can improvise to any tune, taking on jazz dissonance in her vocals and also imitating instruments.” She has toured the US, Canada, Scandinavia, Europe, and China with New York favorites the Cangelosi Cards, and also performs with western swing band the Brain Cloud, Mona's Hot Four, and gypsy jazz ensemble Gaucho. For more information, see TamarKornVoice.wordpress.com

Molly Ryan (vocals), lauded as “a critic’s favorite” by the Wall Street Journal, evokes the big band singers of the 1930s with her silvery voice and lush, elegant vocal style. Molly has become one of the most sought-after vocalists on the New York jazz scene, performing alongside such prominent artists as Randy Reinhart, Jon-Erik Kellso, Bria Skonberg, Dan Barrett, Mark Shane, Rossano Sportiello, and Vince Giordano and the Nighthawks. She has appeared at numerous jazz festivals throughout the country, including the Sacramento Jazz Jubilee and the Sweet and Hot Music Festival in Los Angeles, and has headlined in Paris at jazz clubs such as the famed Le Petit Journal and Autour de Midi. Her second album is forthcoming; for details see MollyRyan.com.

Dennis Lichtman (clarinet) is a multi-instrumentalist deeply entrenched in the worlds of traditional jazz, western swing, and bluegrass. In June 2011, he was featured in the Wall Street Journal as the leader of Mona's traditional jazz jam session in Manhattan, which was described as “ground zero for an emerging late-night scene of young swing and traditional jazz players.” Dennis has performed at Carnegie Hall, Symphony Space, Lincoln Center, and at Severance Hall in Cleveland following the Cleveland Orchestra; he has toured throughout the nation, in Europe, China, and Hawaii; played at major jazz, bluegrass and world music festivals; and has recorded on over two dozen albums on his clarinet, violin, and mandolin. Recently, Dennis released a CD from his western swing band, the Brain Cloud, and has been touring the world playing fiddle with Nation Beat, a Brooklyn-based band that explores the common ground between American and Brazilian roots music. For more information, see DennisLichtman.com.

Matt Koza (reeds) has played with the Artie Shaw Orchestra since 2000 and became its director in 2010. He has toured the United States, Taiwan, and Brazil with the band, accompanying Tony Bennett, Jack Jones, and Buddy DeFranco. Matt is active in the swing and traditional jazz scene, playing dances, concerts and festivals with the Harry James Orchestra, the Tommy Dorsey Orchestra, James Langton’s New York All-Star Big Band, Gordon Webster, and Vince Giordano’s Nighthawks, among many others. He teaches at York College / CUNY.

Nick Russo (guitar/banjo) is not only a world-class jazz performer (who has appeared at Carnegie Hall, Lincoln Center, The Blue Note, Birdland, and in Japan, Spain, Russia, Brazil, Bermuda, Canada, and France), but is also an in-demand musician in off-Broadway productions, an adjunct professor at Essex College, and the author of several guitar books. Nick has appeared as a sideman with Victor Jones, Jimmy McGriff, Teddy Charles, Sonny Dallas, Miles Griffith, David Pleasant, Kim Clarke, and with bands such as Vince Giordano & the Nighthawks. For more information, see NickRusso.org.

Rob Adkins (bass) has toured the world with the Cangelosi Cards, Gordon Webster, and other traditional jazz and swing groups. In New York, Rob has performed with Nick Lyons, John McCutcheon, Ryan Snow, the Jesse Elder Quintet, the Theo Croker Quintet, Tin Pan Blues Band, and many others.

Kevin Dorn (drums) is one of the busiest drummers in traditional jazz, whose career has included performances with Dan Barrett, Ed Polcer, Dick Hyman, Allan Vache, Johnny Varro, Bob Wilber, Dan Levinson, Mark Shane, Terry Blaine, Howard Alden, Jon-Erik Kellso, and Warren Vache. He has performed with the Loren Schoenberg Big Band, Vince Giordano’s Nighthawks, The Flying Neutrinos, David Ostwald’s Gully Low Jazz Band, The Manhattan Rhythm Kings, Banu Gibson and the New Orleans Hot Jazz, and many others. Kevin has appeared on TV with Jack's Big Music Show as well as an HBO special, and performed at Kennedy Center, Lincoln Center, Carnegie Hall, Iridium, and Birdland, as well as at festivals including the JVC Jazz Festival, Jazz at Chautauqua, the Atlanta Jazz Party, the Colorado Springs Jazz Party, the Bix Beiderbecke Memorial Jazz Festival, the Sacramento Jazz Jubilee, the Los Angeles Sweet and Hot Festival, and the Nairn Jazz Festival in Scotland. From 2002 to 2004, Kevin was the drummer for the Jim Cullum Jazz Band. He is also founder of the Traditional Jazz Collective, a group that has received praise from The Mississippi Rag, The New York Times, Cadence Magazine, and The Smithsonian Magazine. For more information, see KevinDorn.com.
copyright © 2011-2018 Gordonburi Music LLC